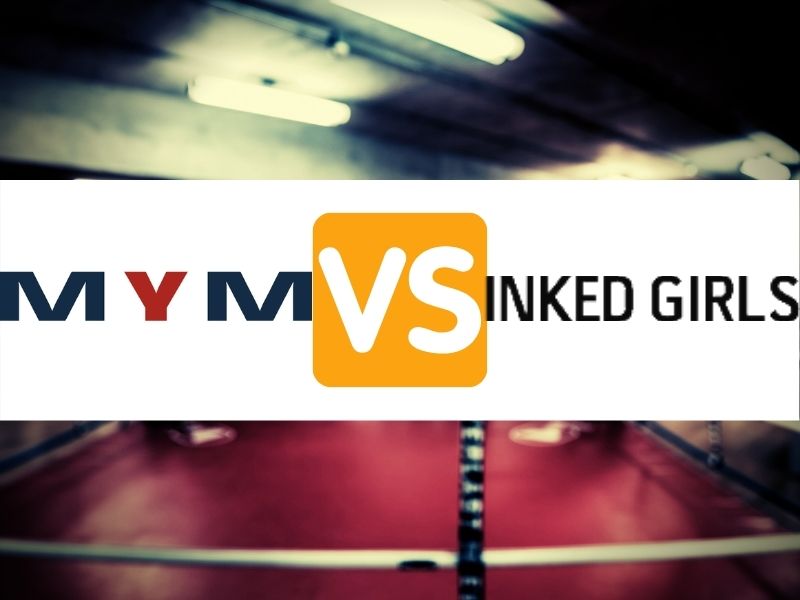 For all you tattooed beauties out there deciding on which platform to start uploading your content onto, we have you covered. Both Inked Girls and MYM.fans offer great features and benefits for content creators, but which one is better for you?

Inked Girls is a sister site to IsMyGirl & IsMyGuy that’s all about models that have a lot of tattoos. It’s a niche subscription site which is very rare right now. By having a narrow market they cater to, they quickly cornered the market for models that are addicted to ink.

MYM.fans is a primarily French-speaking premium social media platform for public figures, influencers, and content creators. It has many tools for you to increase your earnings & a unique blurred content feed to give followers even more reason to subscribe.

In this article, we’ll compare and contrast the two platforms so you can get a clear idea of which one would work for you. By the end of the article, you will know exactly which premium social media platform will help you grow a fan base, gain dedicated subscribers, and make a lot of money.

One of the most important things to consider when choosing a platform is how you can make money. Whether you want to live stream, sell video clips, refer models, knowing what’s all available on a platform is key. Inked Girls and MYM.fans offer their own ways for you to make money.

There are many ways to make money on Inked Girl, including

You can start earning money on MYM.fans by

Inked Girls pays out 80% on all subscriptions, video sales, and tips and pays out 70% on all live streaming. The 20 and 30 percent, respectively, goes toward payment processing, hosting, maintenance, and research & development.

The pay periods for Inked Girls are the 1st to the 15th and the 16th through to the end of the month. There is a $50 minimum for withdrawals and they are automatically deposited by the 2nd & 17th of the month, assuming you meet the minimum requirements. If not, those earnings are carried over to the next month until you break that threshold.

MYM.fans pays out 75% on subscriptions, 80% on private media, and 90% on tips. This is unique in that there is a different payout depending on how you’re making money. Their SuperStar program increased your subscription and private media rate by 1%.

Models on MYM.fans are paid out once they reach the minimum €50. They can choose to withdraw twice a week, once a week, twice a month, or once a month. Subscription payments are held in pending for 15 days for monthly subs and 60 days for annual subs. Private media and tips are held in pending for 7 days after receiving. This is to prevent against fraud. After the time limits, income is moved from pending to validated and are queued for withdrawal.

Sign up for Inked Girls by clicking here now!

New models and veteran models both benefit greatly from a platform that helps its models grow. Organic growth is absolute money for content creators because you increase your subscribers and followers with no extra effort on your end. Really look into what Inked Girls and MYM.fans do for you when you’re on their platform.

Right away then you go to the Inked Girls homepage you’re met with the most popular, most active, and highest selling models. You can easily filter to the newest models on the platform, trending influencers, and content creators that have the most uploads. Whether you’re brand new or have years worth of content, you can be discovered.

The explore page offers a random assortment of content for fans to find new models. This works well when you have a lot of content because it will be easier to show up here.

Inked Girls also has a strategic partnership with Inked Magazine & a social following of over 36 million followers.

The SuperStar program benefits include

The SuperStar status is given out automatically on the 1st of each month and lasts for the duration of the next month.

Which referral program is better

Referral programs are an incentive for you to get your friends and other models onto the platform. They pay you a percentage of whatever a new content creator earns that doesn’t come out of the influencer’s income.

Inked Girls’ referral program offers you 5% of all earnings for every model you refer forever. You can refer an unlimited amount of models.

MYM.fans has a sponsorship program that pays out 10% for every model you have signed up with your link. You can refer as many models as you want and their earnings aren’t affected by this program.

Which should you use Inked Girls or MYM.Fans

Inked Girls is a one stop shop that you can do anything on. From streaming to clip sales to regular posting, it is the most complete platform out. MYM.fans is fantastic for models that have a network of friends they can refer.

To learn more about Inked Girls and read a full overview and review of the platform, click here. If you’re interested in joining Inked Girls, click here to sign up and start making money today.

Sign Up for Inked Girls by Clicking Here Right Now!

For more information about Inked Girls:

Your resource for up-to-date information about adult media platforms.